The air that stops breathing

From our education system, parental guide, we tend to follow wisdom, mythology, science, knowledge that have been existing and continue to receive all the information. We also tend to continue to develop what we have received through transport of information becoming something that is innovative with all reason of humankind needs of today’s life. There is probably a missing link can be found out during the process of interpretation or application of the transported information.
I percept, that the meaning of the symbolic object and the transport of the information are distinguished by time, range of culture, and economical status of a society.
In a world that continuously request for changes, from time to time, I see there is no difference than what how an organic process can work. I see that humankind becomes like a flow of a streaming river. It looks wild, but it goes into the same direction. It is a direction with no ends, like the ocean, the openly wide space.
The mind that we keep in our common language has been selected by our individual way of life. The life that we feel now is no more the same like yesterday. Things change, nothing remains.

I don’t see any necessity to sacrifice myself as part of a duty.  I regret the history of mankind that follows the step of Alexander the Great for the search of a new paradise, became a strategic knowledge of supremacy or the competition of power. The ancient histories that we follow through the process of religious supremacies or colonialism have been retaining in our culture and influenced our today’s developments as humankind in the society.
I regret that the history has to go through blood, killing field, massacre and especially the lost of our own life, in any form or aspect. 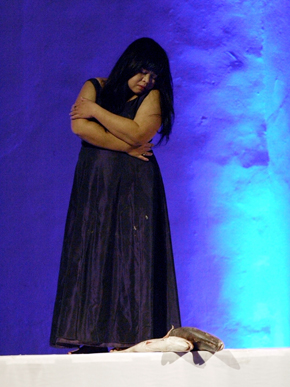 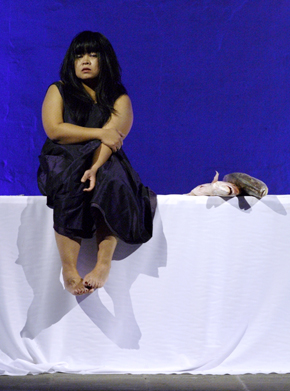 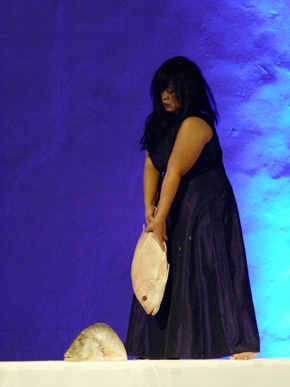 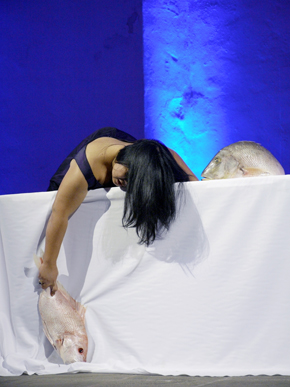 The death of a fish and the lovers

I consciously choose fish as a symbolic object that represent the mythology, which has been believed since the ancient time until now. I am regarding the use of a fish as a symbol in the perspective of believes, religions, myth, and knowledge. See “fish as symbol”
„UGO“ is the mind that I have been loosing, the heart that I left behind, the throat of my own that is slit. The lost of Ugo, is the lost of spirit I have been trying to maintain. “UGO” is a meeting between a lover and the death of existence, a transformation from the visible into the unknown. Disappearance of potential roles, into another being that is free. 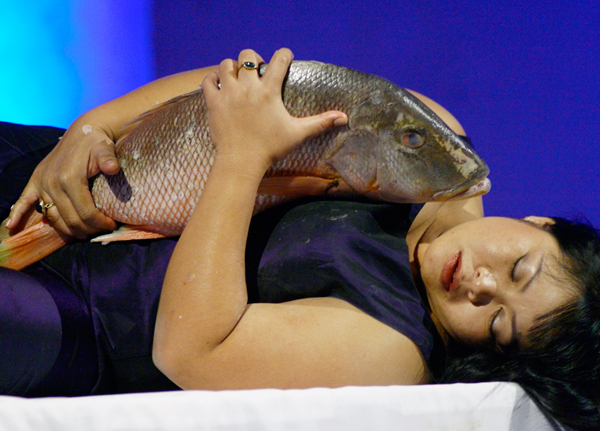 The time counts down

Trying to understand the time that presence during the change itself is an effort to put my body into the independency of time. A second is not a second as we know what a second means. I try to follow the deepest timing that the body produces. By listening to the heart beat and formulating with the air I breath, there should be another time is not able to be defined by the standard measuring of time.
I call it, the dissolving of the common awareness.
It is not to reach any certain meditation’s level. It is an individual deliberation to free the mental abundance.  Eliminating oneself from any constructed borders by history, political background or culture that identify our presence. 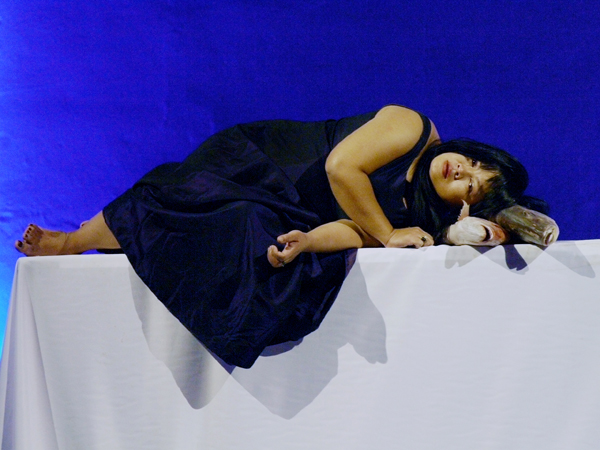 “Ugo” is an five hours long durational performance where two fresh dead trout fish are put on the white lined iron bed. The artist is communicating with the dead fishes, moving very slowly but precisely, as if she is dancing for the whole duration of the performance.

Duration of the performance: 3 hours 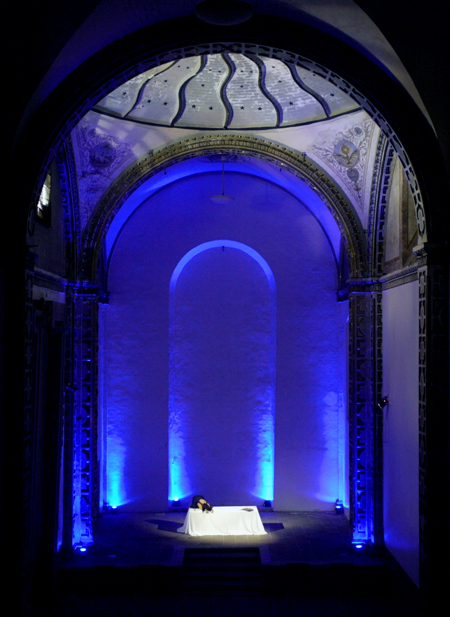 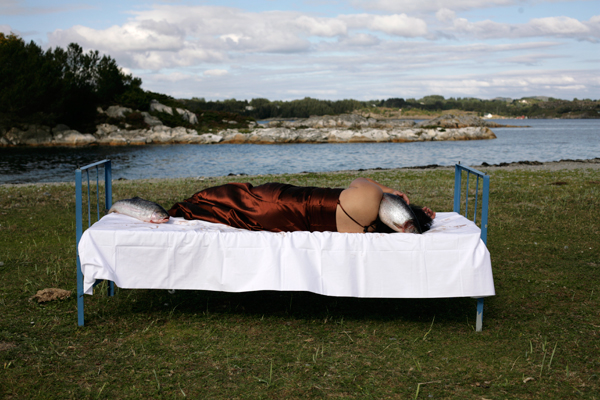 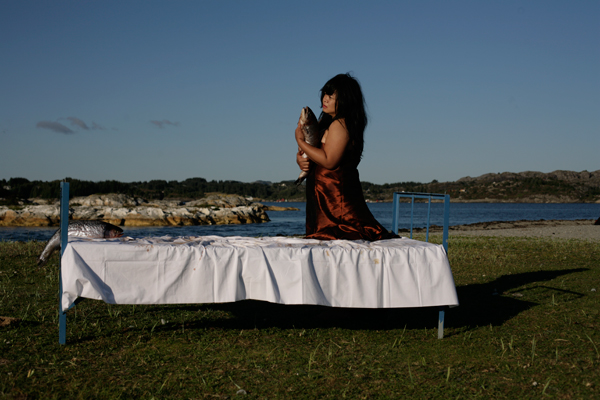 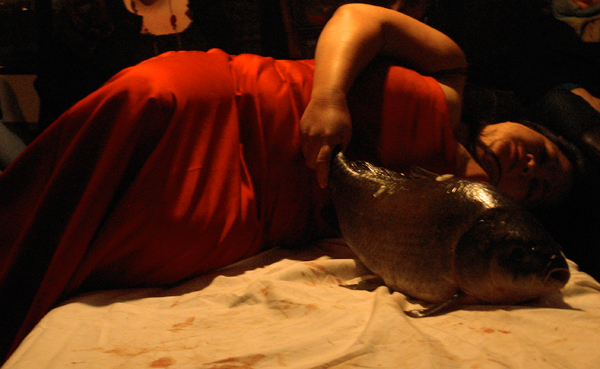 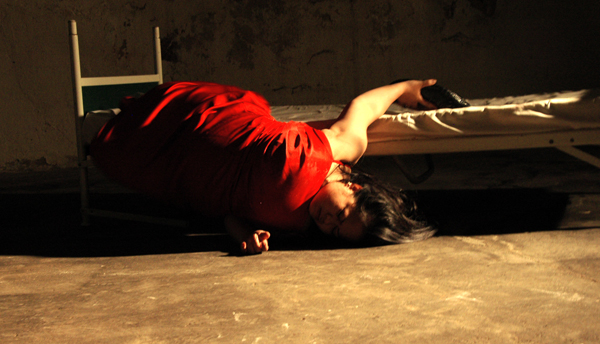 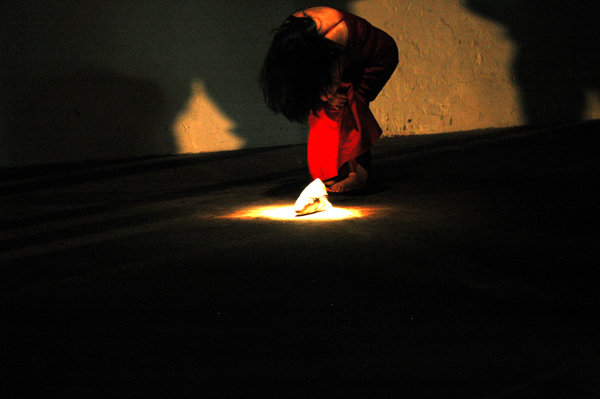 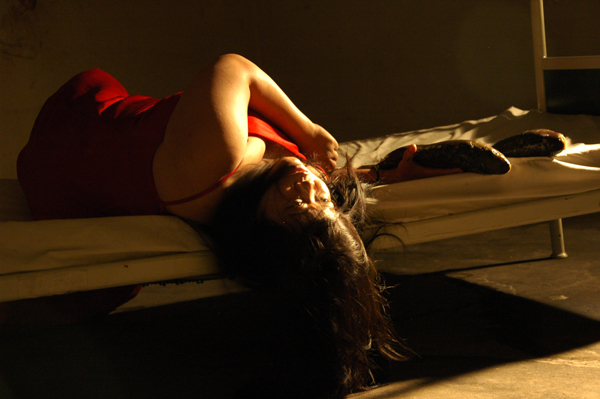