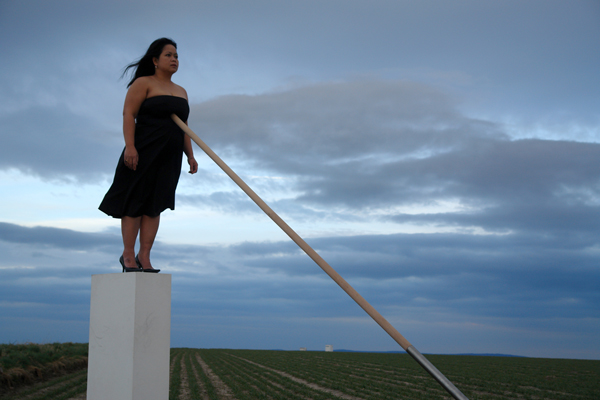 In 2002, I was asking myself about my practice in performance art, especially how it relates with my origin. Different than my approach for the Lullaby for the Ancestors performance (2001), where I adapted the “form” of Javanese traditional ritual performance into the contemporary interpretation, in Alé Lino, I was going more into different approach to get answers for my biggest question which was, what is it the emptiness, in terms of physical, psychological and psychic or shamanistic practices? After collecting some information, I begun my field research in South Sulawesi, by visiting some Bissu communities, around Pangkep and Bone region.
I was looking for a possibility to learn, observe and understand the spiritual practice in regarding physical and mental endurance. In many information sources about Bissu, mostly focus on the concept of gender, but I am more interested to know more about the practical issues and if I could get an answer about my question on emptiness. 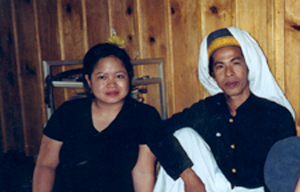 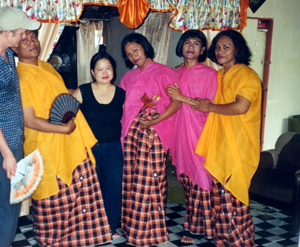 Melati with Bissu community from Bone, 2003

Bissu was known since the growing of Buginese Empire, and its one of the genders of the Bugisese Tribe, an ethnic group of South Sulawesi. The Bissu are commonly termed "gender transcendent" or as "having a ritual role" in the Bugis culture. There are divergent theories regarding the definitive origins and meaning of "gender transcendent" in this context.
Traditional Bugis society has five types of gender. Australian author, Sharyn Graham, in a research report titled Sex, Gender and Priests in South Sulawesi, Indonesia (in years 2002), said the classification of gender in South Sulawesi were Male (or in Buginese language call it Oroane), Women (or in Buginese language call it Makunrai), Women who look like men (or in Buginese language call it Calabai), Men who look like women (or in Buginese language call it Calabai), and paragender (or in Buginese language call it Bissu).
In popular language is called trans-gender. Bissu is cultural heritage in pre-Islamic South Sulawesi. Sharyn mentioned as gender bissu because bissu truly transcendent is pastor. Despite their graceful movements, has a side bissu masculinity, which is carrying a machete and Badik or martial arts expert. Even they have a supernatural power. The Bissu are sometimes portrayed as transvestites, but this seems to be a misunderstanding to much of their history and role in society.
To be Bissu, one has to fuse all aspects of gender. In many examples this means to be born hermaphroditic or an intersexual individual. There appears also be examples of Bissu, in which male or female Bissu are fully sexually formed. The unusual inter-sexual role of the Bissu is not exclusively connected to their anatomy, but to their point in the Bugis culture, their gender-less (or all all-encompassing gender) identity and their exhibit of many types that can not be accurately allocated to any one sex. This is in evidence in the Bissu?s attire. The Bissu dresses in a type of garment that is not worn by any other sex and which incorporates both "female" and “male” qualities, which explains why Bissu cannot be termed Transvestites, or Cross-dressers, as they are only permitted to wear the garment which is appropriate for their given gender caste.
In addition to acting as liaison between the king, man, and gods in the days of empire, Bissu also considered sacred. In the Bugis language, means Bissu holy man who is not menstruating and not bleeding. Sacred because they are pastors. No periods because even as their women are men. No bleeding because their bodies can not penetrate metal or tin. Because of their ability to extraordinary bissu entrusted by the king to keep royal heritage. The existence of royal heritage today are not separated from the role of bissu. Nowadays, the community increasingly rare Bissu and they has a leader which keeps their existence as old tradition rooted in the La Galigo epic. This community can be found at Bone, Wajo, Soppeng, and Pangkep Regency, but most of them found it at Pangkep Regency. If lucky, visitors can see the attraction of the Bissu in various ceremonies from the court to rice planting rituals and records the chants, drumming, dances and ceremonies central to the life of the Bissu priests and early Bugis people. One of the ceremony that always held is "Mappasili ritual Segeri" in the early growing season or around the month of November, Located about 70 kilometers north of Makassar, they can also present the attractions base on request but it will pay for it. 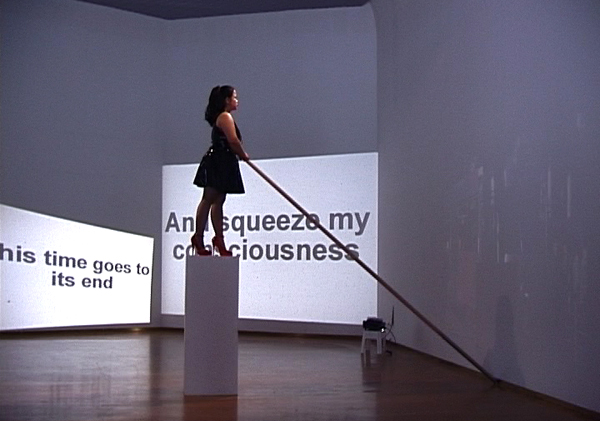 In this performance, I decided to do the most simple but durational action, where I stood on a high pedestal, and lay a four meters long pole on to my solar plexus (celiac plexus). The solar plexus is a dangerous target point in the martial arts practice. This, according to some martial as well as shamanistic practices, is an area of the body that controls other nerves plexus in the body. But this is also as so called a dead point. It is also the point that brings all nerves are working in an extraordinary way, when it is being hit or shocked. In order to reach a kind of completed emptiness between the physical and mental, I slightly lean on the one end of the pole. The focus during this action is just to breath, and emptiness in my mind gradually reached during the three hours durational performance.

Through this performance, I wanted to experience the relationship between spirituality and the body in a performance art context. This is also one way for me to re-connect with myself, my practice with my cultural roots. 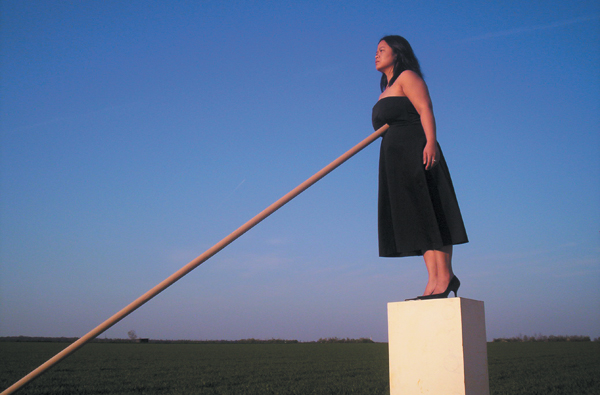 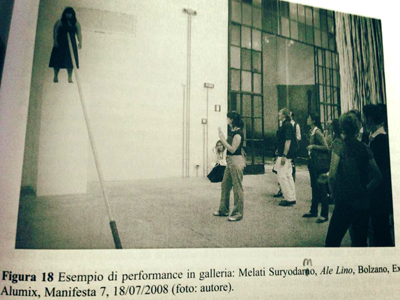