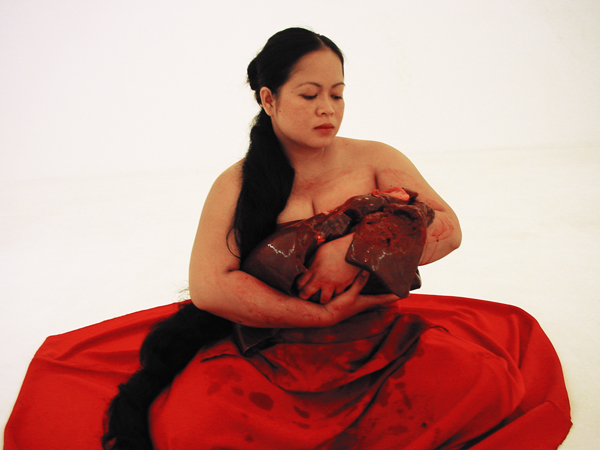 I began my interest to search more about the relationship between the psychological aspect and the physical body, the organs. According to most of Asian cultures included Chinese traditional medicine practices, the condition of our organs in our body are much influenced by our psychological state and behaviours. I related with an idiom coming I used to hear in Indonesia, “eating your own liver” (in bahasa: makan hati), which could be interpreted as swallowing your own pain. In fact, liver as an organ, which is a vascular glandular organ in vertebrates that secretes bile, stores and filters blood, and takes part in many metabolic functions, for example, the conversion of sugars into glycogen, but according to the Chinese medicine, the stored and hidden anger cause damage in the liver. 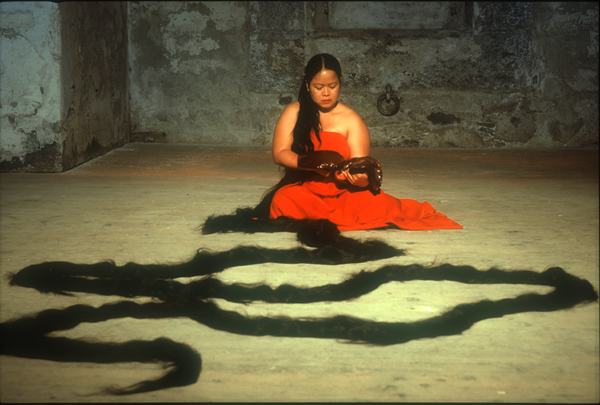 During my process, I was inspired by Durga, a female figure from the Mahabharata epic. Although there have been different recipients about the character of Durga between in India and Java, Durga is covering all over an image of both female demon and goddess. Durga's distinctive nature, and to a great extent probably her appeal, comes from the combination of world-supportive qualities and liminal characteristics that associate her with the periphery of civilized order. In many respects Durga violates the model of the Hindu woman. She is not submissive, she is not subordinated to a male deity, she does not fulfil household duties, and she excels fit what is traditionally a male function, fighting in battle. As an independent warrior who can hold her own against any male on the battlefield" she reverses the normal role for females and therefore stands outside normal society. Unlike the normal female, Durga does not lend her power or Shakti to a male consort but rather takes power from the male gods in order to perform her own heroic exploits. They give up their inner strength, fire, and heat to create her and in so doing surrender their potency to her. Many renditions of Durga s mythological exploits highlight her role reversal by portraying her male antagonists as enamored of her and wanting to marry her. They have no wish to fight her at all, assume that she will be no match for them in battle, and proceed to make offers of marriage to her. In some variants of the myth Durga explains to her antagonist and would-be suitor that her family has imposed a condition on her marriage, namely, that her husband must first defeat her in battle. The suitor is unable to do this, of course, and is annihilated in his attempt. In some forms of the myth the goddess rejects the offer of marriage with fierce, combative language, foretelling how she will tear her would-be suitor to pieces in battle. The antagonist, however, insists on interpreting this language as a metaphor for love play and blindly insists on trying to overcome the goddess in battle. Nearly all forms of Durga s mythical exploits portray her as independent from male support and relationships yet irresistibly powerful. She is beautiful and seductive in appearance, but her beauty does not serve its normal function, which is to attract a husband. It serves to entice her victims into fatal battle. In short, this beautiful young woman who slays demons seeking to be her lovers and who exists independent from male protection or guidance represents a vision of the feminine that challenges the stereotyped view of women found in traditional Hindu law books. Such a characterization perhaps suggests the extraordinary power that is repressed in women who are forced into submissive and socially demeaning roles. In her role reversal Durga exists outside normal structures and provides a version of reality that potentially, at least, may be refreshing and socially invigorating. 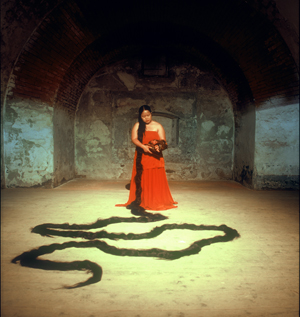 To me, Durga could exist in our female life environment. Women often embody two different characters. The contradictive situation, that they often create by them selves, appears in the daily life situations. Let’s say about the hidden anger against the inequality in social, politic and economical sectors.

In The Promise, the long hair extension I put on and the red dress are representing my personal state of mind as part of the ambiguous society, being in between the stream of beauty and monstrosity.

This work is dedicated to my mother, for her lost after her long-term fight against cancer, to all women who never gives up to love the live they live in, to all mothers who lost their children during the war time, and mothers who are unable to be like they want to be.

I sit on the floor with the long hair and red dress, holding a whole row liver of a cow. I hold the liver and move in the space.  I put sometimes my hands inside the liver. I change my gestures while holding the liver into various positions. 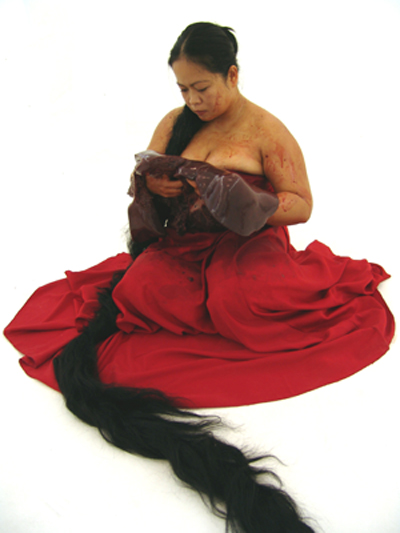