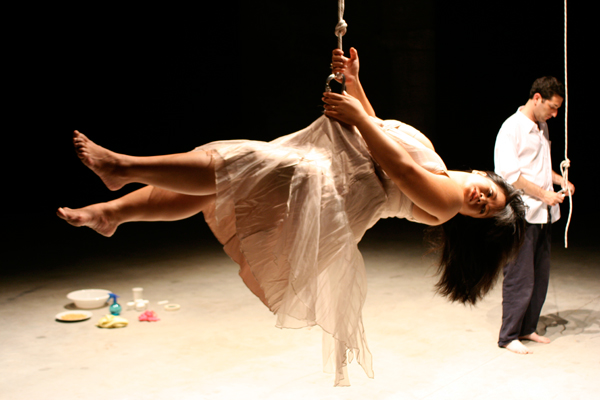 About Limerence
Limerence, as posited by psychologist Dorothy Tennov, is an involuntary cognitive and emotional state in which a person feels an intense romantic desire for another person (the limerent object). It is characterized by intrusive thinking and pronounced sensitivity to external events that reflect the disposition of the limerent object towards the individual. It can be experienced as intense joy or as extreme despair, depending on whether or not the feelings are requited.to conflict,
Tennov describes limerence as beginning with a barely perceptible feeling of increased interest in the limerent object, that, if nurtured by appropriate conditions, can grow to enormous intensity, although in most cases it subsides to a low level after some time. At this stage, states Tennov, limerence is either transformed through reciprocation or it is transferred to another person who then becomes the new limerent object. Under the best of conditions the waning of limerence through mutuality is accompanied by the growth of an emotional response more suitably described as love.

Distinction from love and other emotions
Tennov differentiates between limerence and other emotions by asserting that:
Love involves concern for the other person's welfare and feeling, while limerence does not require it. Affection and fondness exist only as a disposition towards another person, irrespective of whether those feelings are reciprocated, whereas limerence demands return. Sex with the object is neither essential nor sufficient to an individual experiencing limerence, unlike one experiencing sexual attraction. Limerence is much longer-lived than feelings such as infatuation, romantic passion, and puppy love, enduring for months or even years. Limerence can have low-level periods which would not be considered infatuation.

Thenov describes that Limerence has certain basic components such as, 1. intrusive thinking about the limerent object, 2. acute longing for reciprocation, 3. some fleeting and transient relief from unrequited limerence through vivid imagining of action by the limerent object that means reciprocation, 4. fear of rejection and unsettling shyness in the limerent object's presence, 5. intensification through adversity, 6. acute sensitivity to any act, thought, or condition that can be interpreted favorably, and an extraordinary ability to devise or invent "reasonable" explanations for why neutral actions are a sign of hidden passion in the limerent object, 7. an aching in the chest or stomach when uncertainty is strong, 8. buoyancy (a feeling of walking on air) when reciprocation seems evident, 9. a general intensity of feeling that leaves other concerns in the background, 10. a remarkable ability to emphasize what is truly admirable in the limerent object and to avoid dwelling on the negative or render it into another positive attribute. 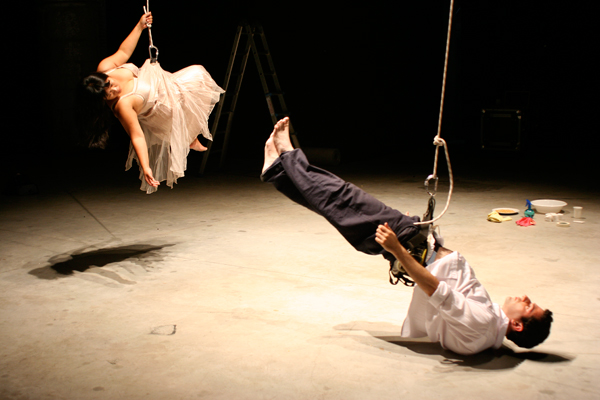 The Game
I am very interested to one of the Tennov explaination about the “game” in the limerence.
The interplay is delicate, with the reactions of each person inextricably bound to the behavior of the other. Progression toward ecstatic mutuality may not involve externally created difficulties but feinting and parrying, minor deceptions, and falsehoods. The uncertainty required by the limerent reaction may often be merely a matter of perception.
Despite ideals and philosophy, a process begins that bears unquestionable similarity to a game. The prize is not trifling: reciprocation produces ecstasy. Whether it will be won, whether it will be shared, and what the final outcome may be depends on the effectiveness of actions and those of the limerent object; indeed on skill. Deviations from straightforward honesty become essential limerent strategies.
Fears lead to proceeding with a caution that will hopefully protect from disaster. Reason to hope combined with reason to doubt keeps passion at fever pitch and too-ready limerent availability cools. Open declaration of true feelings may stop the process. Limerent uncertainty as well as projection can be viewed as the consequence of the limerent inclination to hide feelings.
Because one of the invariant characteristics of limerence is extreme emotional dependency on the limerent object’s behavior, the actual course of limerence must depend on the actions and reactions of both people. The interplay in which the decreased or increased feelings involved is delicate if the relationship hovers near mutuality; a subtle imbalance, constantly shifting, appears to maintain it. Each person knows who is more limerent.” 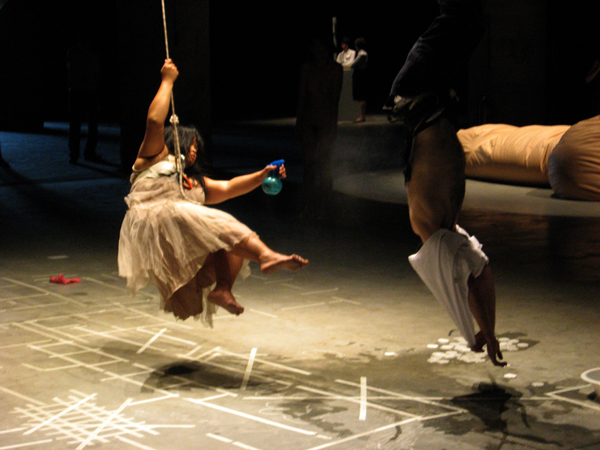 Based from studying the Tennov’s theory of Limerence, I see some relation with some religious or spiritual exercises.
I assume that limerence has been a subject over the centuries. It was defined as different languange. It could be the lust which cause the sin for some religions, it also could be the physical desire that brings you to bad karma, or also in the modern spiritual teaching, it is the unstable recognition of oneself emotional deviation.

Height of LImerence, is a performance where I invited a male partner I did not know well before. I provided some materials like roasted chicken, gloves, glass, chalks, sticky tapes, water, water spary, ladder, and construction to hang. I invite him to perform by rules, based on interaction in the difined space. The communication of both of us, should appear through our active involvements.

Duration of the performance: 5 hours, 3 days 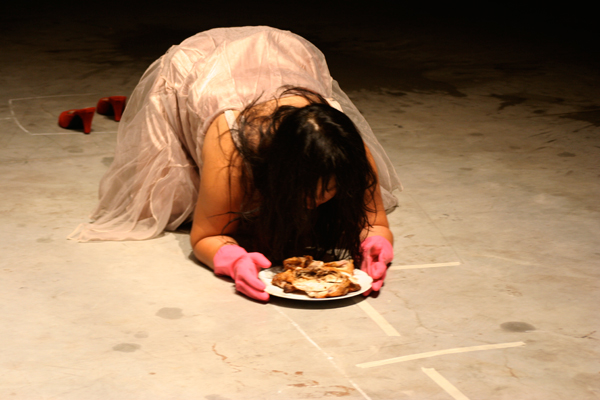 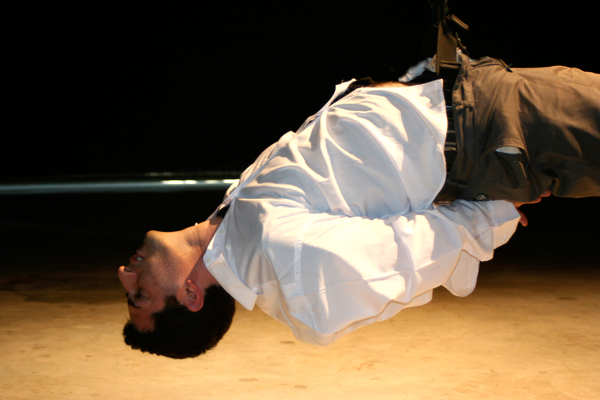 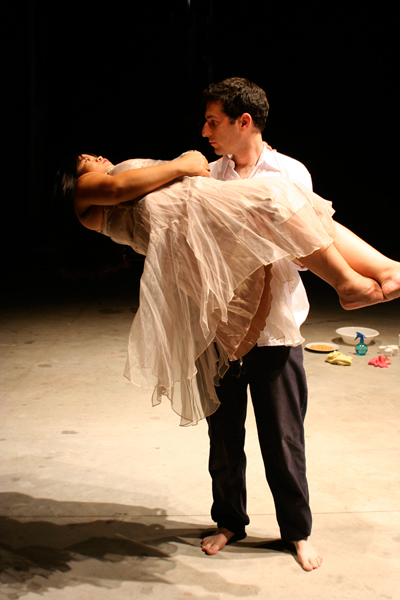 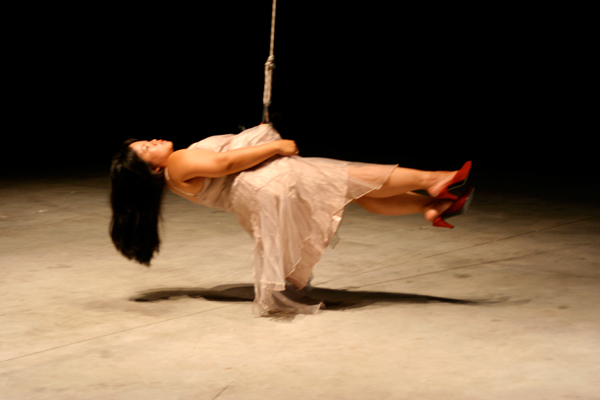 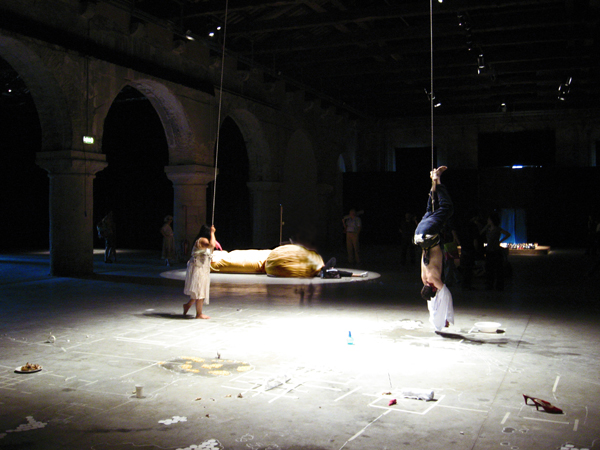